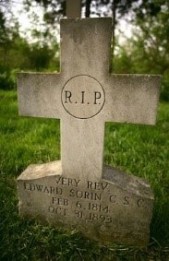 Though he is not a saint (nor is he currently being considered for canonization), Father Edward Sorin, C.S.C. was a remarkable man who was animated with a stubborn faith and missionary zeal. Born in the west of France in 1814, ordained in 1838, Father Sorin was 28 years old when the Blessed Basil Moreau offered him a parcel of land in north-central Indiana that had been purchased by Rev. Stephen Badin, the first Catholic priest ordained in the United States, and left in trust to the Bishop of Vincennes for anyone who would found a Catholic school on the site. Father Sorin’s original land grant of several hundred acres was the site of an early mission to Native Americans, but included only three small buildings in need of repair. Accompanied by six Brothers of St. Joseph (later the Holy Cross Brothers) Brothers Vincent, Lawrence, Anselm, Gatian, Francis Xavier, Joachim and Father Sorin arrived in November 1842 and called the fledgling school L’Université de Notre Dame du Lac. The early Notre Dame was a university in name only.  It encompassed religious novitiates, preparatory and grade schools and a manual labor school, but its classical collegiate curriculum never attracted more than a dozen students a year in the early decades. Father Sorin’s overarching vision of a great American Catholic university in the tradition of the great Medieval universities has inspired Notre Dame’s growth over its entire history. “So confident was he in his own powers, so sure of the ultimate righteousness of his goals, so deep his faith that God and the Virgin Mary had summoned him to America to accomplish this great work, that no obstacle could confound him,…“He was capable of duplicity, pettiness, and even ruthlessness. But for sheer courage, and for the serene determination that courage gives birth to, he was hard to match” (O’Connell, Rev. Marvin, Father Sorin, 2002). When a catastrophic fire destroyed most of the University in 1879, Father Sorin vowed to rebuild his life’s work.  Curricular, pedagogical and research components were expanded and enhanced to the point that, upon Father Sorin’s death in 1893, the foundation was firmly set for the growth of what has become the world’s leading Catholic university and one of the nation’s top twenty institutions of higher learning. (Information taken from Dennis Brown. December 2001) 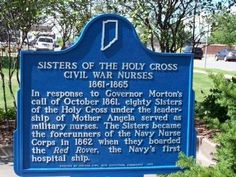 He was one of the first Brothers of St. Joseph founded by Father James Dujarié in 1820 to teach in parish schools in France. Brother Vincent was the senior member, known as the “Patriarch” of the six religious who accompanied Father Sorin in 1841 from France to the States. For many years he took an active part in the direction and formation of the novices destined for the brotherhood. Father James Trahey, C.S.C. wrote in 1906: “How many an icy heart he changed into a burning coal of fervor! How many a marble slab of worldliness he chiseled into the stature of the perfect man! How many a rough bit of quartz he polished into the glittering gem!” Father Sorin spoke of Brother Vincent as the “co-founder” of Holy Cross in America. He and Brother Anselm were picked by Bishop Hailandière to teach in the Cathedral elementary school in Vincennes. He did whatever the task asked of him from brick making and cooking to business master for the fledgling university. Upon his death, the following was written about him in The Scholastic: “On Wednesday, July 23, the venerable Brother Vincent passed peacefully from earth in the 93rd year of his age. He was one of the 6 religious, who, in 1841, accompanied Father Sorin from France to the shores of this Western World. Ever since that time he has been the associate of the venerable Founder of Notre Dame in the great work which he inaugurated and has carried on to such a successful issue. For many long years Brother Vincent had directed and watched over the formation of the religious spirit in the youthful candidates in the novitiate, and the lessons inspired by his piety and beautiful example left a deep and lasting impression and contributed materially to the infusion of that zeal and devotion which have made the Congregation of Holy Cross, in the United States, so happily successful in the attainment of its mission. When advancing years deprived him of physical strength, he still continued as a model to his fellow religious, whose work he aided by the power of the prayers with which he constantly was occupied. His was a life full of years and merits, and we may have every confidence that has been fittingly rewarded by that glory and joy which await the good and faithful servant.” He is buried near Father Sorin in the Community Cemetery at Notre Dame.

Published by Bro. Philip and Benjamin