Augustine was the first Burmese to be ordained a Holy Cross Priest.  He was a vigorous missionary from 1919 through the mid-1920’s as he contributed many articles about his missionary adventures to the The Bengalese.  Biographical information about him after 1930 is scant to non-existent, and there is no definitive information regarding the date of his death.  What follows has been excerpted from three issues of The Bengalese, the periodical that was published for subscribers to “[share] in the spiritual benefits of membership in the Bengal Foreign Mission Society” (The Bengalese, Vol. 1, No. 1, p. ii, September 1919).   First: “On May 25, Augustine Mascarenhas was ordained to the Holy Cross Priesthood at Dacca by His Lordship, Bishop Legrand.  He is the first native priest of the diocese. The young priest has returned to Ranchi to complete his theological studies with the Jesuit Fathers” (Vol. I, No. 1, pp 9-10, 1919).  Second: “The darkest clouds have proverbially a silver lining…as Father Mascarenhas recently had the occasion to discover. [He] has been spending the first year of missionary life traveling from village to village in the Burmese district of the mission, visiting the native Christians and spreading the Good Tidings among their pagan neighbors.  During a recent rainy season, Father Mascarenhas encountered many 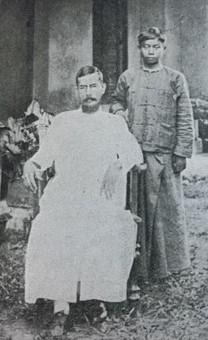 obstacles on his journeys, and one trip in particular…was made memorable by water and by mud. The silver lining of the clouds that afflicted him…proved to be a number of unexpected conversions, and brought the young apostle so much joy that the hardships of the trip were quite outweighed” (Vol. 2, No. 7, p. 110, March 1921).   And lastly, about his work among the Burmese Chins. “My head is full of plans and with God’s unfailing help I shall carry them out. Chief among them are these: 1. To open a convent for girls of this district at Sandoway; 2. To open a school for boys at Sandoway; 3. To open a commercial school for young Burmans and Chins; 4. To push forward a Chin lad of fifteen in his studies for the priesthood” (Vol. III, No. 3, p. 7, March 1922).  Ave Crux Spes Unica!

In 1935, it was reported that “Brother Isidore, C.S.C. died fortified by the Holy Sacraments, at St. Joseph’s Hospital, South Bend, Indiana, October 17, 1934. April last he became ill with streptococcus inflection, which despite every effort to stay its ravages, proved fatal.  Brother Isidore was born at Locks, Michigan, September 4, 1886. He was invested with the Holy Habit and entered St. Joseph Novitiate, Notre Dame, July 2, 1910. After a course of studies at the University of Notre Dame, he taught English and mathematics at Holy Trinity High School in Chicago.  Keenly interested in the welfare of young men, he actively engaged in organizing parish and school clubs. He met with hearty response in this work at Holy Trinity, a parish then numbering 20,000 souls. After several years of fruitful labor in Holy Trinity, he was appointed Superior of Sacred Heart College, Watertown, Wisconsin, then, as now, the preparatory school for candidates for our Brotherhood.  In this responsible position he further displayed the zeal and the talent for organization so characteristic of him. The Superiorship of Dujarie Institute, the house of studies for the Brothers of Holy Cross, Notre Dame, was Brother Isidore’s next appointment. During his term of office, the house was thoroughly renovated and partially remodeled; the beautiful grounds were extended and improved; and a gymnasium was built.  Afterwards he taught at Columbia University, Portland, Oregon; Holy Cross College, New Orleans, where he served as Prefect of Discipline, and Cathedral High School, Indianapolis. At this school he was notably successful in promoting ‘drives’ that netted generous sums of money for the missions in India. Photography, his hobby, he placed also at the service of the missions, for Brother Isidore made handsome returns from the sales of excellent pictures.  The welfare of his beloved Congregation was at all times the ideal that inspired him. He had a great devotion to St. Joseph, the patron of the Brothers, and to Our Lady of Sorrows, patron of the Congregation of Holy Cross. Peace to his soul” (Source unknown)

At 80 years old, Sister Patricia Mulvaney said, “I never wanted to be in any other life except the one I chose”. At nearly 90 years old, she said “Yes” one last time to the Risen Jesus who embraced her with everlasting love, two days before the 67th anniversary of her vowed life as a Sister of the Holy Cross. Her devotion to family, Holy Cross, and the compassionate ministry of health care were at the heart of her long life. Sister Patricia’s zeal for Holy Cross may have come from her grandfather, Richard Seidel, a music professor at Saint Mary’s College (1890 – ca. 1930s) hired by Mother M. Pauline (O’Neill), CSC. She was preceded in Holy Cross by her aunt Sister M. Richardine and her older sister, Sister Mary (Vincent Clare) Mulvaney, CSC. Her younger sister, Sister Elisbeth Mulvaney, CSC, ministers at Saint Alphonsus Medical Center in Boise. Patricia Mulvaney applied to the Sisters of the Holy Cross after her first year as a nursing student in 1948. Having visited Saint Mary’s, she wrote Mother Una (Garrity) that she was so eager to enter the Congregation immediately “that I don’t know how I will wait the next six months.” She received the habit a year later. She completed her registered nursing degree in 1954 and her Bachelor of Science in 1955.  By 1960, she finished her Master of Science in nursing administration from The Catholic University of America in Washington, D.C., while teaching nurses at Saint Alphonsus Hospital in Boise, Idaho.  From 1960–1963, she served as director of the School of Nursing at Holy Cross Hospital in Salt Lake City. Fully committed to a lifelong ministry of healing, Sister served as administrator of Saint Alphonsus until 1972 where “she became known for her forward thinking when she made a courageous move by relocating the hospital from downtown Boise to its present site.” She had assessed the risk and the opportunity in such a move, attributing its ultimate success to the dedicated board members and stakeholders.  Sister Patricia Mulvaney served as a councilor for the sisters’ health region and then was elected as their Western Regional Superior (1975-1981), assuming leadership for the sisters not only in health care, but also in education, pastoral and justice ministries. Sister Patricia spent her years out of office researching geriatrics and managing the building of a new retirement facility for the sisters at Saint Catherine by the Sea in Ventura, California. In 1987, she chaired the Holy Cross Health System and transitioned into the role of president and CEO of HCHS until April 1989.  She was elected that summer as General Councilor for Retirement until 1994. After a sabbatical, she served five years as the superior at Saint Mary’s Convent at the motherhouse. Saint Alphonsus Medical Center welcomed Sister Patricia back to Boise in 2000 where she attended to its healing mission for 12 years. While there, she established a palliative care program and received several awards: Star Garnet Award from the Idaho Hospital Association for promoting health care in Idaho; Woman of Today and Tomorrow award from the local Girl Scouts Council as a role model for girls for her visionary leadership; and the hospital’s 2003 Distinguished Citizen honor. Whatever recognition she received, she accepted it in the name of the Sisters of the Holy Cross. (Adapted from the eulogy written by Sister Catherine Osimo, CSC)