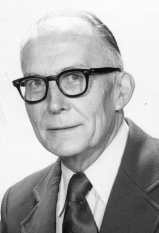 Born in 1913 in Chicago, Thomas Malley entered the Holy Cross Brothers in 1931 making final vows in 1936.  His first assignment was to take care of the power plant at Sacred Heart College in Watertown, Wisconsin. Two years later, he went to the University of Portland where he took on the role of purchasing agent.  In 1937 he was assigned to the University of Notre Dame as director of utilities for 41 years, and for nearly 50 years he was chief of the Notre Dame fire department. Father (now Bishop) Daniel Jenky gave the eulogy at his funeral mass.  Here are parts of what he said: “A ‘patriarch,’ according to the dictionary definition, could be described as ‘a venerable old man’ or ‘a revered senior member of a community’ or ‘a respected elder.’ Well, in our Holy Cross family here at Notre Dame, Brother Borromeo rather aptly and completely fulfilled this role…. He was immensely proud that he was Fire Chief for so many years.  If for 41 years Brother efficiently kept the fires burning at Notre Dame, he was equally adept for nearly 50 years in putting them out anywhere else on campus. He was given his job in 1939, and by 1940 he had built, from the chassis up, Notre Dame’s first completely motorized fire apparatus…. Brother Borromeo was a wonderful person, a good and faithful brother, a man of religious poverty, and a great friend to an awful lot of people.  Borromeo without a lot of fuss or dramatics, lived a life entirely for God and neighbor. He expressed his love and devotion to Our Lady by caring so well and so long for her school.” Father Edmund Joyce, C.S.C. gave the homily. Here is an excerpt: “My first official contact with Brother occurred in 1951 soon after I was named vice president of business affairs. Foreseeing the building boom which would soon be on, Brother Borromeo strongly urged that we utilize our excess steam capacity to generate our own electricity.  While this required a large capital expense to get started, 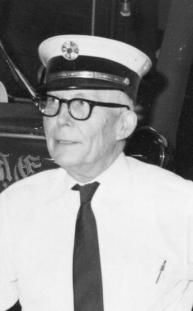 we did indeed save millions of dollars by generating our own electrical power…. I had hundreds of business contacts with Brother Borromeo over the next three decades and was continually impressed with his common sense, his rare ability to deal with architects, engineers, contractors, fire chiefs and other professionals on a friendly but business-like basis.” In an article printed in “It’s Notre Dame Fact…” by Phil Loranger, he wrote: “[Brother Borromeo] became only the third man since 1870 to hold the title of director of utilities, a post that made him manager of the tiny, ill-equipped university rail system [ND & W Railroad].  In his nearly 60 years as head of the line, Borromeo never missed the opportunity to improve the track, cars or equipment. The 65-ton, 400-horsepower diesel engine No. 5332, still resplendent in its blue and gold colors, was his proudest contribution…. [T]here was a time when the ND & W had tracks that led to the old ice house and the university stock pens where hogs and steers were unloaded. During World War II, military trains were a common sight on the tracks and until 1962, when the last passenger trains brought Fighting Irish fans to the campus for drop off, as many as five trains would be birthed on the tracks. It was Borromeo and his staff who would lay out more than 5,000 yards of hose to provide water and fuel for the steam and diesel engines while the passengers watched the Irish football team play in the stadium.”  “For all of his consummate professionalism in his duties at the university what Brother Borromeo will be remembered for by most of us was that he was first and foremost a true religious—faithful to his God and his vows” (Father Joyce).

Born in South Bend, Michael Mathis entered Holy Cross in 1901 and was ordained in 1921.  In 1920, he received a doctorate in Holy Scripture form Catholic University. It was about this time that he became interested in the Holy Cross foreign missions and began his plans for a new seminary in Washington, D.C. which would train men especially for India.  In 1924, he became the first superior of the Foreign Mission Seminary, and he also inaugurated The Bengalese, a magazine specially interested in promoting Holy Cross foreign mission.  Simultaneously, he became a co-founder, together with Dr. Anna Dengle, of women’s religious organization, the Medical Missionaries, whose object was to spread the Catholic religion among the poor and sick women of India.  In 1939, he became a faculty member at Notre Dame, and two years was appointed chaplain at St. Joseph Hospital until retirement in 1959. He was considered by all to be a wonderful chaplain. 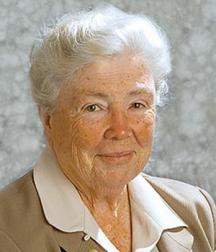 Three days before her 21st birthday, Mary Agatha Farrell applied to the Sisters of the Holy Cross.  She was a civil service secretary working for the War Department in Los Angeles, California, in the last year of World War II. In response to a question about her motivation “for leaving the world,” she replied only, “I feel I have a vocation.”  In 2001, she was less cryptic filling out another form, this time explaining why she wanted to apply for a sabbatical for spiritual renewal: “After 56 years as a Sister of the Holy Cross, having worked every year in a school, hospital, or parish, this opportunity would be a ‘first.’” As Sister M. Agatha Ann, she began her ministry in 1947 in elementary education in Catholic parochial schools throughout California and Utah, moving from the classroom to the principal’s office. From 1970 to 1975, while serving as principal, she earned her California license to direct day care-nursery schools. From 1975 to 1977, Sister Agatha Ann was director of personnel in the Department of Education for the Archdiocese of San Francisco. During those years she also worked in special education in public schools in the Daly City School District. Anyone who saw her doing business over the phone would have thought it all looked easy as she spoke with a broad smile. She had wonderful organizational skills, enjoyed being with people and was a good listener. It’s no wonder that Sister Agatha Ann transitioned to pastoral care in 1977 at Holy Cross Hospital, Salt Lake City, Utah. Though she was there only a year, she returned to pastoral care and chaplaincy from 1991 to 1999 at Providence St. Elizabeth Care Center, North Hollywood, California.  In the intervening years, from 1978 to 1990, Sister Agatha Ann ministered in several parishes working with the elderly in Southern California and in the Seattle area. Sister Agatha Ann was also a religious superior in her Congregation but was unpretentious in the role, whether as a local convent superior, a postulant formation assistant or regional councilor. Many times, she was also filling other positions beyond the local convent. At the time of Pope John Paul II’s visit to the United States in 1987, she was asked by a reporter in Tenino, Washington, about priestly ordination for women. She was never known as a firebrand, but with a shrug, she reluctantly offered the following viewpoint to The Olympian: “Here at St. Peter’s Mission, we minister as best we can as a group of women in the church. We can do that in so many ways. I would have no objection to women being ordained nor would I have any objection to a married clergy.” Sister retired first to Saint Catherine by the Sea Convent, Ventura, California in 2002, moving in 2011 to Saint Mary’s Convent, Notre Dame, Indiana, where she died. Her older sister, Sister Estelle Marie (Farrell), survives her at Saint Mary’s. Their fine Catholic parents, Louisa Hutson and Jeremiah Farrell, raised seven children in Los Angeles at Saint Agnes Parish, where they were taught by Holy Cross sisters. (Written by ​Sister Catherine Osimo, CSC.)