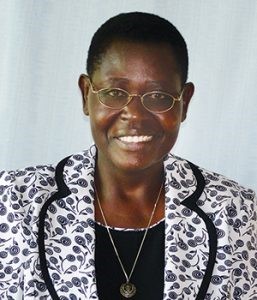 “I am Kunihira” which means a woman of hope. Sister Stella Maris was born at Katumba village near Fort Portal, Uganda. She was the first born with three siblings to follow. She was so proud of her father, Modesto Katalebabo, who was the head catechist in Virika Parish. Teaching was always sister’s love. After completing primary school at Kinyamasika Primary School in 1979, she joined the first level of teacher education at Kinyamasika Teacher Training College completing Grade III level in 1987. As she was teaching at Kinyamasika Primary School, she took the big step to join the Sisters of the Holy Cross in September 1988. She also studied as a private candidate for secondary education with the assistance of her dear friend Sister Leonella, CSC, and Brother Jim Nichols, CSC. She often talked too about her prison ministry at Katojo Prison outside Fort Portal and how she and Sister Elizabeth Tusiime would assist the women prisoners who lived in very poor conditions. After professing her first vows in September 1992, she continued her many years of education ministry. While she was teacher/headmistress at St. Andrew’s Primary School, she was also able to receive her Grade V diploma from Kaliro Teacher Training College. Even though the living conditions were very challenging, Stella persevered. In 2003, Sister Stella Maris was privileged to receive a scholarship to Saint Mary’s College in the United States. She first attended Holy Cross College for two years and then graduated in 2008 from Saint Mary’s College with a bachelor’s degree in sociology. After returning to Uganda, she served as headmistress at Moreau Primary School in Kirinda, Kyenjojo District for one year. She had the desire to work with older students which brought her back to Jinja where she served at Holy Cross Lake View school as librarian and English teacher. When she left Lake View, Brother Ben Mugisa, CSC, invited her to assist him in coordinating the Holy Cross schools in Jinja. She was filled with joy in being able to share her teaching experience and love with Holy Cross teachers. Besides teaching, Sister Stella Maris had other congregational responsibilities, such as vocation director, director of the temporary professed sisters and Area of Africa councilor/secretary. Sister Brenda Cousins, General Leadership Councilor, said about Sister Stella Maris that she was “a person who gave steady, humble service to God’s people and said, ‘yes’ to whatever God called her to in the Congregation.” (Information taken from a eulogy by Sister Mary Lou Wahler, CSC)

Theotonius was born in Hashnabad, which is in present-day Bangladesh, on Feb. 18, 1920.  After being educated by the Brothers of Holy Cross at Holy Cross High School in Bandura, Theotonius attended St. Albert’s Seminary in Ranchi, Bihard, India. He was ordained a diocesan priest in the Dhaka Archdiocese on June 6, 1946. In 1947, Father Ganguly went to the University of Notre Dame to earn a master’s degree and doctorate. He graduated with his Doctorate in Philosophy in 1951, making him the first Bengali Christian to receive a doctorate. He decided to enter Holy Cross and professed First Vows on August 16, 1952.  Upon returning to Bangladesh, Ganguly began teaching at Notre Dame College. He was made the school’s Dean of Studies in 1954 and Assistant Principal in 1958. On March 21, 1960, Ganguly was appointed Principal. On September 3 of the same year, Pope Saint John XXIII nominated Fr. Ganguly as Auxiliary Bishop to Archbishop Lawrence L. Graner, C.S.C. in the Archdiocese of Dhaka. He was ordained a bishop on October 7, 1960, becoming the first Bengali bishop. On July 6, 1965, he was appointed Graner’s co-adjutor, and when the archbishop retired November 23, 1967, Ganguly became the Archbishop of Dhaka.  Ganguly was known for the way he respected the dignity of every person. He had a truly religious spirit and a gentlemanly character. His gentle, yet strong persona helped him shepherd the Archdiocese through the trying time of the Bangladesh Liberation War in 1971. A heart attack caused his sudden death on Sept. 2, 1977. Archbishop Ganguly’s Cause for Sainthood was opened by the Archdiocese of Dhaka in September 2006, thereby declaring Ganguly a Servant of God. (Congregation of Holy Cross 2019)

John O’Neill entered the Novitiate, July 9, 1874. After his novitiate he was assigned to the college shoe shop, though he had offered himself for the Bengal Missions or Molokai. Over the nearly 50 years of his life as Brother Columba, he received much acclaim through his devotion to the Sacred Heart and was known by many as the “Divine Healer” and as the “Miracle Man of Notre Dame”. He distributed Sacred Heart badges throughout the Midwest and never claimed any credit for cures which may have occurred. Upon his death in 1922, thousands recalled the humble devotedness of the shoe maker Brother Columba O’Neill.