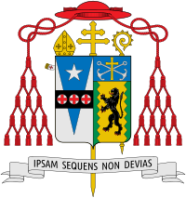 The fourth of ten children, O’Hara enrolled at the University of Notre Dame in 1908 and in 1910 became a founding officer of Notre Dame Knights of Columbus. After earning a bachelor’s degree and graduating in 1911, he entered the Congregation of Holy Cross in 1912 and made his profession in 1914.  After ordination and graduate school, he returned to Notre Dame, where he served as prefect of religion and dean of the College of Commerce. O’Hara greatly fostered the practice of daily reception of Communion still a newly approved practice by the Catholic Church. He was appointed the Vice President of the University of Notre Dame in 1933 and its president in 1934. During his tenure at Notre Dame, he brought numerous refugee intellectuals to campus. He also made doctorates available in philosophy, physics, mathematics and politics. He was a builder: constructing a new laundry, the post office, infirmary, the Rockne Memorial, Cavanaugh, Zahm and Breen-Phillips dormitories. He believed that the Fighting Irish football team could be an effective means to “acquaint the public with the ideals that dominate” Notre Dame. He wrote, “Notre Dame football is a spiritual service because it is played for the honor and glory of God and of his Blessed Mother.” In 1939, O’Hara was appointed by Pope Pius XII as an Auxiliary Bishop of the United States Military Ordinate as well as the Titular Bishop of Milasa.  He received his consecration as a bishop on January 15, 1940 from Archbishop Francis Spellman in Sacred Heart Basilica. A devotee of the Blessed Virgin Mary, he selected as his episcopal motto: Following her, you will not go astray. He was named the eighth Bishop of Buffalo in 1945. O’Hara expanded Catholic education in the diocese and eliminated racial segregation in schools and churches. Promoted as the fifth Archbishop of Philadelphia in 1951, he often answered his own doorbell, which he explained by saying, “How else can I meet the poor?” Pope Saint John XXIII created him a cardinal in 1958. He is the only priest of the Congregation of Holy Cross to be raised to the College of Cardinals. John O’Hara died at age 72 and is buried at the Basilica of the Sacred Heart in Notre Dame, Indiana.

Mother Mary of the Seven Dolours, C.S.C. (Leocadie Gascoin, 1818-1900) collaborated with Blessed Basil Moreau in the foundation of the Sisters’ Society. When she was 22, she felt called to a life “given to Charitable works”. On August 4, 1841 Father Moreau himself gave the religious habit to her and to the three companions (Sister Mary of the Holy Cross, Sister Mary of Compassion and Sister Mary of Calvary) who preceded her in the novitiate. It was these four novices who became the first real community of sisters… the community that completed the religious family of Holy Cross. In 1849, she was appointed superior of the mission in Canada. In 1860, she was elected the first provincial and eventually became the superior general. Until her death in 1900, she tirelessly worked to establish and to safeguard her Marianites of Holy Cross. When Blessed Moreau was rejected at the end of his life by his Congregation, it was Mother Mary of the Seven Dolours who remained faithful, “sharing his suffering, defending him, offering the little material offering she could; surrounding him with respect and affection till the moment of his death”. In 1886 she requested that she not be re-elected Superior General—she had performed this service for 26 years. She died in 1900 at 82. (Paraphrased from the paper “Mother Mary of the Seven Dolours as a Person and Collaborator” by Sister Graziella LaLonde, C.S.C., delivered at History Conference, Stonehill College, 1989.)

“Born in Ireland…[Dennis O’Dwyer] came to the United States in 1907 and entered the Juniorate of the Brothers of Holy Cross at Notre Dame. Early recognized for outstanding abilities, for largeness of mind and goodness of heart, having served successfully as the Principal of three high schools, in 1931 Brother Ephrem was appointed treasurer of the University of Notre Dame, and thereafter a member of the Provincial Council. At the General Chapter of 1945 he was selected to be the first Provincial Superior of the Brothers of Holy Cross in the United States. Under his direction, the Brothers and their schools flourished with such phenomenal success that in 1956, the Congregation instituted the Eastern Vice-Province, and appointed Brother Ephrem to be Vice Provincial to the Brothers of the new Vice-Province. In 1953, in recognition of its growth in numbers and good works, the eastern area was raised to the status of Province, and Brother Ephrem became Provincial of the Eastern Province of the Brothers of Holy Cross. A great servant of God, a great leader of men, through the vision and labors of Brother Ephrem, God has blest American education and us all” (Father Richard Sullivan, C.S.C, President of Stonehill College, 1960). In 1976, the University of Notre Dame conferred upon him a Doctor of Laws, honoris causa. “Because he is a man of vision, as well as of Irish wit, he has acted with clarity, undaunted courage, and strength of purpose throughout his religious life. Despite the fact that he shouldered responsibility for many of his active years, and because of his deep trust and belief in God, he always remained profoundly human, and his solicitude for others never wavered in his sixty-seven years of religious profession.”