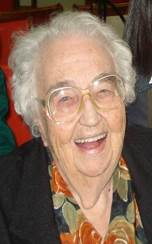 She was born in Nomininque in the Canadian Lauenetians as the oldest of a large family. In 1933 with the sudden death of her mother, she took care of her brothers and sisters. At age 28 she entered the Sister of Holy Cross and for the nest 30 years worked as an educator at Basile Moreau College and CEGEP (General and Vocational College). During these years she earned a doctorate in French literature and was known as a gifted educator. In 1973, she was elected Assistant General of the Sister of Holy Cross and began to make accessible to Holy Cross the writings of the Founder, Blessed Basil Moreau and introduce a renewed reading of Holy Cross sources (from “Tribute to Sister Graziella Lalande, CSC” Micheline Tremblay, CSC, 2018).  “She was the premier Moreau scholar in Holy Cross. Distinctive in her scholarship is that she is the first to explore Moreau’s spirituality and teaching through the lens of education. As a professional educator herself, she recognized the significance of what Father Moreau had to say about the type of pedagogy necessary for Holy Cross to have an impact on the complexities of providing a quality education in 19th-century France. She…authored many booklets on various Moreau themes. Her book, Like a Mighty Tree, (1989) is well known…and [p]rior to her death, she published Who Are You, Basile Moreau? expanding and bringing together revised editions of some earlier works” (from YOU MUST TAKE UP THIS WORK: A Meeting with Sister Graziella Lalande, CSC By Brother Joel Giallanza, CSC, 2010). 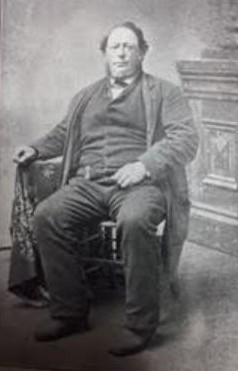 “One of the original six Brothers who came with Father Sorin.  He had for many years been superintendent of farm and general outside financier and business manager for Notre Dame. He had a wide acquaintance and was possessor of a very sociable personality. Many distant friends at funeral” (St. Joseph Valley Resister, April 10, 1873. April 6, 1873). “This excellent and devoted Brother was one of the first band who came to America in 1844. No one in the Community worked harder and more faithfully than himself. Self-sacrificing, ever ready to comply with the wishes of his superior, he recoiled before no hardships.  He spent himself for the Community” (Granger’s Memo, 1873). “Brother Lawrence was born in France in the year, 1816; he entered the Congregation in his 24th year, and came with Very Rev. Sorin to this country in 1841” (Scholastic 1873). “From the time of his arrival to the hour of his death he was constant in the fulfillment of his duties. Although more than any other man of my years, I have seen Religious of undoubted fidelity, of great zeal and admirable devotedness, I remember none whom I would place above our dear departed one in these qualities. Bro. Lawrence held almost without interruption for the third part of the century the responsible position of steward or business agent of the Community at Notre Dame, and during that time he had many staunch friends among the farmers of the county and among business and professional men of South Bend and Chicago. Brother Lawrence carries with him the deep and unfeigned sentiments of esteem and respect not only of his entire Community, but also, I believe of all with whom he came into contact, either as a Religious or a business agent of the Institution” Circular Letter Father Sorin). 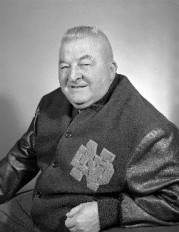 The legendary “Strongman-Priest,” motivated his lifters with a combination of fear and Teutonic discipline, tempered by love for “his boys.” More than anything he was a hero to those who worked out in his quaint gym behind the Golden Dome. This man, who had a reputation for toughness, was toughest on himself. He was known as one of the strongest men in the world. “Dutch”, as the Prussian-born youth was known, received his degree in 1912 and returned to Notre Dame a year later as a Holy Cross novice. He was ordained in 1917 and earned a bachelor’s and a master’s degree at Notre Dame and a Ph.D. in biology at St. Edwards University in Austin, Texas. In 1922, four years after he started weight-training, he was proclaimed the “Fourth Strongest Man in the World.”  Diabetes and the deterioration of his eyesight forced him out of the classroom in 1935. He met the situation by honing his talents for sculpture and woodworking and becoming overseer of one of the first and finest collegiate weight-training facilities in the United States. This son of immigrants from Danzig, East Prussia worked as a roughneck in the Pennsylvania oil fields before coming to Notre Dame for prep school. In the east corner of his gym was Lange’s immense workbench, where he turned out plaques and trophies for his boys; built hauling wagons, benches and racks for the gym; and made several busts of his old friend, Knute Rockne. Many of the altars and missal stands in Sacred Heart Church and other campus chapels were crafted here. Toward the end of his life he was blind in one eye, deaf in one ear, but he never complained. Father Lange was at heart a gentle man. During the Great Depression, he gave free swimming lessons to the children of Notre Dane employees. Mindful of his own immigrant background, he befriended the Polish groundskeepers on campus, making them frequent gifts of jackets and money. They were his kind of folks: simple, hardworking, honest. He was known to make small “loans” to them when they were in a bind.  Knute Rockne was an enthusiastic supporter of Lange’s concepts, and Ara Parseghian was to give him special recognition for his work with many of his players. Lange had an impact on generations of Notre Dame students. (Gill, Jr., M.D., Paul G. Notre Dame Magazine, Spring 1987)