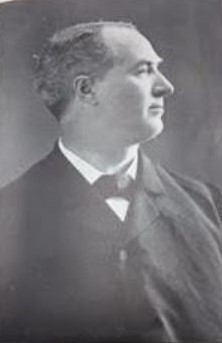 “Brother Paul, Prefect of the Senior Department of the University, died in the evening of the 12th instant. For a number of years the deceased had suffered from the ailment which finally carried him off, though he had been but a few days confined to his bed before his death. Known in the world as Patrick Connors, he was born in Ireland in 1850, and in 1867 entered the Congregation of Holy Cross at Notre Dame. During the past 25 years he has been one of the prefects of the Senior department, and was ever zealous to promote the happiness and welfare of the students. As a consequence he was deservedly held in high esteem, and by all who knew him, the tidings of his demise will be received with deep and sincere regret” (Scholastic, 27:236) “…the death of Brother Paul [of the Cross] has been a great shock, and a cause of intense sorrow to the members of Brownson Hall, with whom he was very closely connected as Prefect. The last fatal illness was of such short duration that it is almost impossible to realize that he is gone. All are firm in the conviction that the place vacated by Brother Paul will be hard to fill” (Scholastic, 27; 237). “Died December 12, 1893. Aged 42. Identified with Notre Dame 28 years. Most of that time, a prefect. In close intimacy with students, because of his great interest and leadership in athletics. Fine physique and handsome man. As leading spirit in founding Athletic Association and as Chairman of Board of Control, he laid foundation of modern athletic system. A vigorous athlete himself and Director of Athletics at the time of the death” (Scholastic, 1893). “In the early days of the school’s football career, Brother Paul was the only member of the campus religious who was an athletic zealot. He was manager of the first four Irish teams, back in the days of caps and handlebar mustaches” (Ward, Arch.  Frank Leahy and the Fighting Irish). “The ‘enthusiastic boom’ predicted by the Scholastic was not long in getting under way, for in the following week a meeting was held on the Notre Dame campus to form a Rugby Football association with Brother Paul, the father of athletics at the University, being named president. Brother Paul managed the first four Notre Dame elevens [football teams]. It was he who suggested that campus elevens be organized and was instrumental in securing uniforms for them” (Ward, Arch).  “Apropos of the renewal of athletic relations with Michigan, Notre Dame gratefully recalls the day in 1888 when Ann Arbor authorities sent their team, at the request of Brother Paul, to teach us the art of football. Last week in Cleveland, Mr. Ernest M. Sprague, one of those Michigan sportsmen, died. You are asked to pray for his soul. He refereed the game. When a Notre Dame man crushed into the Wolverine quarterback after he had signaled for a fair catch, then knocked the ball from his hands, scooped it up and thundered down the field for a touchdown, Mr. Sprague disallowed it and penalized Notre Dame. ‘In only a split second’, he said, ‘one hundred and fifty wild Irishmen were around my neck. Brother Paul saved me, raised his hand, asked for silence, and said: ‘These boys are our guests. We invited them to teach us the game. Mr. Sprague knows the rules.’ Lucky for me from the rule book I satisfied Brother Paul and the boys. I had treated them fairly.” 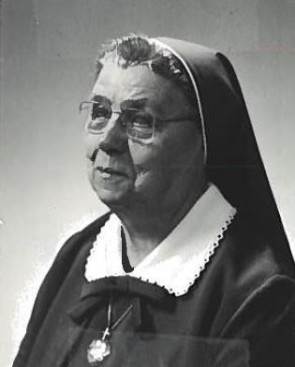 After serving in the Congregation of the Sisters of the Holy Cross for 67 years, Sister Maria Gemma died on March 22, 1982.  She was one of the hundreds of Irish sisters who gave up their homeland to serve the Church in America. Ella M. Mulcaire was one of twelve children born in Limerick, Ireland.  She came to the states at an early age and entered the Sisters of the Holy Cross in 1915. She is a member of a legendary CSC family. Ten members of her family have been members of Holy Cross:  two aunts (Sisters Gertrude and Aloysius), two of her sisters (Miriam Gertrude and Aloysia Marie), two of her brothers and two cousins (Fathers Michael and James Mulcaire and Fathers P. J. Carroll and Joseph Quinlan), and two cousins (Sisters Joseph of the Sacred Heart and Hieronyme).  There are few families who have contributed more to Holy Cross and the universal Church. After graduating from St. Mary’s Academy, Sister earned a life license in elementary education. For the next 62 years she taught in elementary schools throughout Indiana, Illinois and Michigan. Her first assignment was to teach the legendary Minims at the University of Notre Dame following in the footsteps of her aunt, Sister Aloysius, who taught there for 43 years.  This writer was taught by Sister Maria Gemma in 3rd and 4th grade at Saint Mary of the Lake School in Miller, Indiana. She was an excellent teacher dedicated to her work and the children in her care.  A strict disciplinarian, she was a devoted daughter of Blessed Moreau as she developed her students not only in secular subjects but also in character and moral fiber.  As one of the best loved Sisters of the Holy Cross, she literally had hundreds of friends among her religious sisters and the laity. She was a woman of integrity with a deep piety and an abiding love of her Community and everyone in it.  Approachable and gracious, kind and understanding and ever ready to help, Sister Maria Gemma radiated a spirit of serenity, joy and peace. Her character can best be summed up with these lines from the Prayer of Saint Francis. “Where there is hatred, let me bring your love. / Where there is despair in life, let me bring hope. /  And where there is sadness ever joy.” (Information found in a eulogy supplied by Sister Timothea Kingston, C.S.C., Archivist for the Sisters of the Holy Cross.) 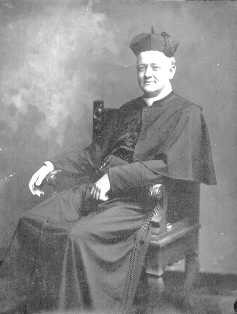 Father Cavanaugh was the 8th President of the University of Notre Dame from 1905 to 1919.  He was born into a family of coal miners in 1870 and came to Notre Dame in 1886 because his mother wanted at least one of her sons to get an education.  In 1889, he received the habit and worked during his Novitiate for Notre Dame English professor Maurice Francis Egan. He was ordained in 1894 and that same year he became the assistant editor of the Ave Maria.  From 1898-1905, he served as the superior of Holy Cross Seminary.  In 1905, he was appointed the President of the University of Notre Dame by Provincial Father John Zahm.  Among the first of many acts to preserve and to highlight the history of the University, in 1906, he had the remains of Father Badin, the man who bought the ground on which Notre Dame had been founded, re-interred in their final resting place in the log chapel on campus. That same year the statue of Father Sorin was unveiled. Cavanaugh was an intellectual figure  known for his literary gifts. He was considered one of the best orators in the United States as attested to by his many eloquent speeches. During his presidency, he dedicated himself to improve Notre Dame’s academic and scholastic reputation, and the number of students awarded bachelor’s and master’s degrees significantly increased. Cavanaugh also worked to enlighten the public about American Catholics, and convince them that they were not the enemy of the United States but that they were full supporters of their country. He especially fought against the Ku Klux Klan, the American Protective Association, and the anti-Catholic newspaper The Menace through his sermons, speeches and articles. He also supported Ellen Ryan Jolly in her effort to install a memorial to the Sisters of the Holy Cross who served as nurses in the Civil War.  During his presidency, the university also rapidly became a significant force on the football field. Yet Cavanaugh resented the implications that Notre Dame should be known as a football school and almost ended the football program because it had been a money-losing operation since 1913.  Ironically, two of Notre Dame’s most famous football personalities appeared during his tenure, George Gipp and Knute Rockne. After he resigned as President of Notre Dame, Cavanaugh kept himself busy. For two years he stayed at Holy Cross College in Washington, DC to teach English. After his return to Notre Dame in 1921, he taught English until 1931.  His health began declining as early as 1915 when he was diagnosed with diabetes. In 1925 he contracted tuberculosis and in 1934 he fell and severely injured his leg. In 1935, he died in the Community infirmary at Notre Dame. (archives.nd.edu. Retrieved February 13, 2019.)