Born in 1924 in Evansville, Indiana, he was baptized as Paul Joseph. A good student both in grade school and high school, Paul attributed his academic success to the encouragement he received from his family.  Attending Reitz Memorial High School in Evansville, he was taught by the Brothers of Holy Cross and liked their lifestyle and decided he wanted to be a teacher like them. In the fall of 1942, he took the night train from Evansville to Watertown, Wisconsin, and entered the Holy Cross postulancy program. He entered the novitiate in 1943, and in 1944 made first vows. Three years later, Brother Romard received his Bachelor of Science degree from the University of Notre Dame and professed his final vows there in 1947. He was then assigned to Austin to begin studies at the University of Texas, earning his Ph.D. in Physics in 1951. Upon his arrival as a graduate student in Austin, Brother Romard also began a professional career of teaching physics and mathematics at St. Edward’s University, his home for most of the rest of his life.  Along the way, he was called to leadership as the local superior at St. Joseph Hall, as Provincial Superior of the South-West Province and, at the international level, as First Assistant General of the Congregation of Holy Cross. He also served as superior of the Vincent Hall Scholasticate, as the director of candidate formation at Moreau House, and in numerous capacities at St. Edward’s University, including Board Chair. Brother Romard was never happier nor more fulfilled than when he was teaching in a classroom or laboratory. Keen on equipping his students with deeper understanding, he taught them not only how to solve a problem, but how to know how to solve it. Other keys to his successful teaching ministry of over forty years were his availability and the obvious care he showed toward his students inside and outside the classroom. A disciple of Blessed Moreau, Brother Romard strongly believed in the power of education to transform the lives of people and ultimately to change the world for the better. Reflecting on his role in the process, Brother Romard once said, “Teachers are key players on the team that is carrying out the Holy Cross educational mission. I am inspired by the great teachers – past and present – with whom I have shared this mission as well as the outstanding students I have worked with, students who have understood the Holy Cross mission and work at developing a similar mission in their own lives.” Later in life, he offered his personal reflections on the “Permanent Core of Religious Life.” He wrote, “Through our religious vows we profess that God is enough for us. We express this spousal love for God in radical love and service of neighbor.” Despite our human incapacity to live religious life perfectly, what characterizes fidelity to our vocation, he counseled, is the constant striving after the lifestyle, the persistent effort to need only God. Summing up his own life, Brother Romard wrote: “Expressing and growing in love for God by doing his will has been the unifying concept that puts my whole life together – religious, personal, professional. I believe that the life of a Brother of Holy Cross is a good channel for doing God’s will. More specifically, I believe that being a Brother of Holy Cross is God’s will for me. I have found great happiness and a sense of fulfillment as a Brother of Holy Cross (and happiness is not inconsistent with suffering). With the grace of God, I expect to die as a Brother of Holy Cross. And I expect to live forever as a result.” (Adapted from a reflection on the life of Brother Romard Barthel, CSC, by Brother Donald Blauvelt, CSC and Brother Richard Critz, CSC.)

“Jesus said, ‘If anyone gives so much as a cup of cold water to one of these little ones because he is my disciple, then I tell you solemnly [she] will most certainly not lose [her] reward.’ The gift of literacy—being able to read—also gives life and sustains it.  This Sister Virginia did for fifty years and in a very special way for the last twenty-six” (Eulogy, no author). She was born in Elkhart, Indiana to Italian parents from Cosenza, Italy. Virginia graduated from Elkhart High School in 1944 and worked for a while at Miles Laboratories.  She entered the Sisters of the Holy Cross in 1946, and in 1947 she took first vows receiving the name Genoveffa. For the next 50 years she worked as a teacher in a “litany” of Midwestern missions. Among these was St. Mary of the Lake elementary school in Miller, Indiana. “She was my fifth-grade teacher and was the tomboy of the convent.  She was the finest playground supervisor a boy could dream of. Sister Genoveffa organized all of the baseball games and was deadly when playing Red Rover. I remember her as an Olympic caliber marble player, winning everyone’s marbles and not giving them back” (Brother Philip Smith)! In 1965, while working at St. Vincent’s School in Elkhart, Sister Virginia realized that her students were not completing their homework because their parents were not literate.  “I think that is when the Lord touched me on the shoulder,” she said in 1997. In 1966, she began an adult literacy program and was committed to its operation until shortly before her death in 1999. She became truly part of the heart with which Elkhart identifies itself: The City with the Heart.  Upon her death in 1999, The Elkhart Truth, posted a front-page headline: “‘Mother Teresa of Elkhart’ dies”.  Father Joseph Rulli who celebrated the funeral mass said this about her: “She had a vision and she went with it.  She was Mother Teresa with an attitude!” Hundreds of people gathered for the celebration of her Golden Jubilee, a celebration she could not attend because she was in the last days of her battle with pancreatic cancer.  Her niece said about her that “she touched everyone’s life she came in contact with. She respected every human being on the face of the earth. She always saw the good in everyone. She never wanted to see the bad.” 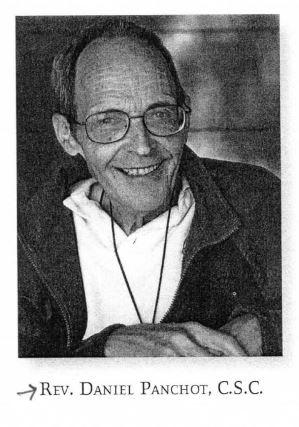 He was born in Tulsa, Oklahoma and took his first vows in the Congregation of Holy Cross in 1957 and was ordained in 1965.  He wrote the following on the occasion of his 50th anniversary of ordination in 2016.  “For me to reach 50 years as a religious priest of Holy Cross is an opportunity more for reflection than for celebration.  As I reflect, I realize how Our Lord has accompanied me, or better said, has guided me in my efforts to follow Jesus…. I realize how Our Lord has protected me in the midst of much violence, such as that of the civil-military government of Chile in the 1970s.  I was arrested the first time a week after the Golpe del Estado. During those years I also lived the richest personal experience of all my priesthood, as part of the ecumenical Comité Pro-Paz, which was formed by the different churches in Chile after the 1973 Golpe del Estado, to assist persons who were persecuted, and their families…. It was a great privilege to be part of the Church and to work with many other individuals who were willing to take the risks (and we paid dearly for it), to assist those who desperately needed help, and this without regard for their religious or political convictions.  It was a living Gospel of Jesus, produced in a warm, loving and family atmosphere…. During those years I was arrested or detained a number of times, culminating with passing through the infamous Villa Grimaldi (the Auschwitz of Chile), and the detention camp 4 Ālamos (incomunicado) and 3 Ālamos (prisoners recognized as such by the government)…. After expulsion from Chile, I joined the Holy Cross Apostolates in Chimbote y Lima, Peru during 16 years, and where Our Lord so protected us in the extreme violence of Sendero Luminoso and MRTA (Movimiento Revolucionario ‘Tupac Amaru’). During these years several priests and religious were martyred, but we were spared for our missions…. At the beginning of the 1990s, our Lord had a new work for me in Mexico, as the province asked me to try to begin a program of vocations and formation for the religious life of Holy Cross with young Mexicans.  There, I lived and worked for almost 20 years, and once more, we were protected from the arbitrary violence of organized crime, in which a number of innocent people were killed in crossfire. And finally, after 35 years, Our Lord brought me back to Chile, where I studied theology and worked for 10 years, to continue working in His vineyard.  Reflecting on all I have lived, I realize that when we stand for the oppressed, we also receive blows. But, did Our Lord not promise us that? And we are committed to building His Reign, not ours…. I realize that during the decades Holy Cross men (and women) have been in Latin America, many have been willing to take risks in order to come near to, and to stand by, those in need.  They were not reckless, but rather, steadfast, and in not a few cases paid dearly for that. It is good and a privilege to be part of the religious family and a Church with a history like that. After all, the Apostles for their part, went out of the Sanhedrin, joyful that they had been considered worthy to suffer for the name of Jesus. (Acts. 5, 41)” (Edited by Brother Philip R. Smith, C.S.C., 2019)