The holiness of Sister Mary Byrnes was practical, immediate and helpful throughout her life. Though she folded her hands in prayer, she also set her hands to do all that makes a house a home or an institution a community. Violet Mary Byrnes attended public schools in Utah, until her last two years of high school graduating from Saint Mary of the Wasatch in Salt Lake City where she was influenced by the Sisters of the Holy Cross and applied to the Congregation soon after graduation in 1946.  She was known as Sister Henry during her years as a teacher in Catholic elementary schools throughout California, from 1952 to 1968.  Sister Mary Byrnes was best known for her helping hand where she served in many ancillary roles. One of the Latin titles for the Blessed Mother in Catholic tradition has been Ancilla Domini, Handmaid of the Lord. Sister Mary’s litany of practical roles in the community included: sacristan, housekeeper, infirmarian, driver, seamstress and office assistant. She especially enjoyed her time ministering with sisters and lay staff of Madonna Manor, Salinas, California, where she was a compassionate companion to elders in the facility sponsored by the California Catholic Daughters of America from 1995 to 2003. Sister Mary was also a gardener. In California, she won ribbons at the state fairs in Monterey County and later in Ventura when she was missioned at Saint Catherine by the Sea from 2003 to 2005.  There Sister raised African violets and roses and sold her sweet peas to a local florist. Due in part to Sister Mary, God’s beauty was found on earth and now in heaven. (Written by ​Sister Catherine Osimo, CSC)

In 1863, when James McLain was 23 years old, he enlisted in the Army of the Cumberland for three years of service.  He was attached to the 15th United States Infantry, where he took part in all of the engagements with General Sherman in the famous March to the Sea.  After the war, James joined the Brothers of Holy Cross receiving the name Brother Leander. For 29 years he was a prefect and teacher at the University of Notre Dame.  Between the years of 1868-89 he was an officer of the St. Stanislaus Pilopatrian Society and of the Mutual Baseball Club. He also taught at St. Pius School in Chicago for two years.  By his fellow religious and his students, he was known as a humble man. When the Grand Army of the Republic (GRA) Post No. 568 of Indiana was erected at the University of Notre Dame, Brother Leander became one of the charter members assuming the office of Vice Commander.  Of interest regarding this post is that all the members belonged to various religious congregations of men; eight of whom were Brothers of Holy Cross (Brothers Cosmas, Raphael, Eustachius, Benedict, Ignatius, John Chrysostom, Agatho and Leander). In 1905, Brother Leander put the customary American flag on the casket of Father Peter Cooney, C.S.C. a Civil War chaplain.  During the same year, Brother Leander was made aide-de-camp of the Grand Army Department of Indiana and was honored with a position in the National Army. In 1906, he was appointed superior of what today is known as the Old College. All in all, Brother Leander was a “religious of genial disposition, possessing an intellect trained to meet and master the many problems which confronted an educator.”  When he died in 1911, his funeral was one of the largest seen at the University of Notre Dame in many years. In a letter from his friend General Abercrombie to Father John W. Cavanaugh, C.S.C., President of the University of Notre Dame, he paid this tribute to Brother Leander: “His was a useful life, an everlasting illustration to the youth of Notre Dame of a patriotic American citizen.” (Taken from the writings of Brother Edward Sniatecki, May, 1983)

“Daniel Hudson was born at Nahant, Mass. in 1849.  His father was a Methodist, and his mother a Catholic.  In later years, Father Hudson used to say that it was his experience with Protestantism in his youth more than anything else that made him a good Catholic all his life.  At fifteen he was working in the Boston Publishing House of Lee and Shepherd, publishers of the great writers of the flowering of New England. The young man knew Longfellow who visited his home in Nahant, and Lowell, Holmes, Whittier and Emerson.  He had Longfellow’s approval of his early desire to be a priest. When he told the great, be-bearded man of letters that he was going to be a priest and a foreign missionary, the old man nodded gravely, and said ‘I am very glad you have such an intention.’  The idea of the foreign missions [eventually] faded from his mind, since in 1870 he said goodbye to home and family, and gravely, bravely, set out to be a Trappist monk in New Mallory, Iowa. But he never got to Iowa [because] he met an old priest on the train, a Holy Cross Father from Notre Dame, an old Civil War chaplain named Father Peter Gillen.  Father Gillian persuaded Daniel Hudson to stop off at Notre Dame, ‘just for a little visit.’ Father Hudson’s little visit lasted just sixty-four years. …The Trappists lost a good contemplative; but Notre Dame gained a saint, and the Catholic Press of the nineteenth century a great and tireless editor. [He was] ordained on June 4, 1875 and was appointed editor of the Ave Maria.   That was his first religious “obedience”—and his last: he kept it until failing health compelled his retirement four years before his death.  He was not a campus 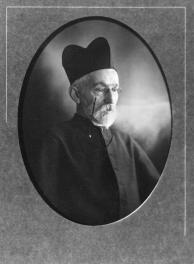 figure: in all his years at Notre Dame he was never in more than six of the forty-odd buildings. All this time he was too busy building the Ave Maria into the most widely read Catholic weekly in the English language.  Father Hudson’s detached way of life, his utter rejection of the easy and pleasant, would have hardened many men, made them odd and eccentric.  But through it all Father Hudson retained the delightful humor and polished, easy ways that delighted students who were lucky enough to run across him.  [He] was not an obscure man, by any means. He died on January 12, 1934. Many distinguished people came to the funeral: and others, including the Pope, wrote letters to his superiors at Notre Dame consoling them upon their loss” (Sheedy, C.S.C., Rev. Charles.  “The ‘Ave Maria’s’ Own Little Saint. Our Sunday Visitor.  November 11, 1945.)