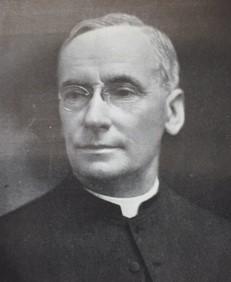 Father Burns was born in Michigan City, Indiana in 1867.  He entered Holy Cross in 1888 and was ordained in 1893, the year Father Sorin died.  For a number of years, as superior of Holy Cross College in Washington, D.C., he was instrumental not only in the development of that house of studies but in the early progress of the Catholic University, being recognized even in those years as an authority and champion of Catholic education in the United States.  As the spirit of the missions began to take hold in the country, Father Burns recognized the importance of fostering this spirit in the Congregation of Holy Cross and gave every encouragement in his power toward the crystallization of that spirit in the foundation of the mission periodical, The Bengalese. In 1927 he was selected to act as Provincial in the United States, a position he held until his election as Assistant to the Superior General in the summer of 1938.  Though the prospect of the journey to India and the difficulties of an official visitation of the mission were far from promising, Father Burns bravely faced the sacrifices involved and journeyed to India in the fall of 1935.  While in India he visited personally all of the mission stations of the Dacca territory. With paternal patience he listened to the enthusiastic outline of opportunities as painted by the “zealous tongues” of the missionaries and he returned to the States visibly impressed with the foreign mission apostolate of Holy Cross in Bengal.  The Mission Procurator and those associated with him in the apostolate of financing the mission acknowledged their heavy debt of gratitude to Father Burns for the careful consideration and seasoned guidance he offered all their plans for the furtherance of their work and the unlimited cooperation and encouragement he gave them in their work, not only by word, but especially by deed.  The last months of Father Burns’ life were days of inexpressible pain. “In dying, as in life, Father Burns remained to the end an example to be aimed at in imitation by his religious brethren.” (Adapted from a memorial by Father Francis Goodall, C.S.C., October 1940, The Bengalese)