Marianite Sister of Holy Cross and founder of the Little Sisters of the Holy Family she was born in L’Acadie, Lower Canada. In the mid 1840s Élodie Paradis’ father moved to the concession of La Tortue, near the village of Saint-Philippe-de-Laprairie, in order to support his family. When Élodie was nine years old, her mother sent her to a boarding-school run by the Congregation of Notre-Dame in La Prairie. Having heard that there was a community of nuns within the Holy Cross family, Élodie presented herself at the novitiate of the Marianite Sisters of Holy Cross in Saint-Laurent, near Montreal in 1854. She was not yet 14. Under the name of Sister Marie-de-Sainte-Léonie she was accepted as a novice. In 1857 she made her vows. In 1862 she was sent to New York, where the Marianites operated an orphanage, a workroom, and a school for poor children in the parish of St Vincent de Paul. Eight years later she joined the American branch of Holy Cross and went to Indiana to teach French and needlework to the nuns who were slated to become teachers. After a short stay in Michigan, in 1874 Sister Marie-Léonie was chosen to direct a group of novices and postulants at the College of St Joseph in Memramcook, New Brunswick.  There she would heed what she considered her calling at that moment: to be an auxiliary and assistant to the Holy Cross Fathers in the mission of educating young Acadians. Fourteen Acadian girls taken into the workroom that she directed began wearing their own unique habit in 1877. In 1880 the general chapter of the Holy Cross Fathers accepted the idea of a new foundation for the needs of the colleges, the Little Sisters of the Holy Family. Sister Marie-Léonie helped “to save the Acadian nationality, threatened and doomed to anglification” as much by Irish Roman Catholics as by Protestants. In 1895 she met Bishop Paul Larocque who agreed to receive the mother house and the novitiate of the Little Sisters into his diocese and to give them his approval. In 1895, after 21 years in Acadia, Mother Marie-Léonie returned to Quebec. In 1896 Larocque granted canonical approval, and Mother Marie-Léonie then applied herself to the tasks of giving her institution a rule of life and helping the nuns develop a spirit of cheerful simplicity and sisterly generosity. Mother Marie-Léonie died on 3 May 1912. In the course of her life she had overseen 38 establishments in Quebec, New Brunswick, Ontario and the United States, most of them in colleges and a few in episcopal households. At the time of her death, the Little Sisters of the Holy Family had some 635 members. Élodie Paradis was beatified in Montreal on 11 Sept. 1984, during Pope John Paul II’s visit. The church thereby recognized an “avant-garde woman” who had met the needs of her time by founding the first institute to help priests in their educational work. Without this assistance, some colleges would have been unable to survive, since they did not have the means to hire lay personnel.

“In the death (Feb. 26, 1920) of Brother Paul the Hermit (John W. McIntyre), at St. Joseph’s hospital, last Thursday afternoon, the Congregation of Holy Cross lost one of its most zealous members.  For many years past — since 1906 — the deceased was an assistant Superior General of the Community. He was born [in] Superior, Wisconsin, [in] 1858 and at the age of 17 entered St. Joseph’s Novitiate at Notre Dame. For the 18 years subsequent to his profession he served most ably as secretary of the University and thereafter in order as assistant Master of Novices, promoter at the House of Studies, Watertown, Wisconsin, as business manager of the Ave Maria and for the last two years as superintendent of construction and accommodation work at Notre Dame. His work in all these offices was marked by fidelity, zeal, and efficiency. Despite the handicap of ill health during many years, he labored untiringly in the service of religion and education and was often able to attend to his strenuous duties only by the wonderful strength of will for which he was so remarkable. An ideal religious with many great gifts of mind and heart, Brother Paul fulfilled his vocation in a manner worthy of the highest admiration. That he may receive quickly the rich reward for which he lived so consistently is the heartfelt prayer of everyone who knew him. A solemn Mass was celebrated in Sacred Heart Church by the President of the University, Rev. John Cavanaugh, C.S.C.” (from a letter to Father Edward Sorin 1891). 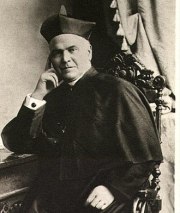 A Union Army chaplain in the American Civil War attached to the Irish Brigade, he also served twice as president of the University of Notre Dame.  Born in Detroit, Michigan he attended public school until 16 when he joined his father’s real estate business. In 1853, he enrolled in the 10-year-old University of Notre Dame and began study for the priesthood three years later. Following ordination, he taught at Notre Dame and served as a local parish priest. He then served as

chaplain of the 88th New York Infantry, which was one of the five original regiments in the Irish Brigade. For nearly three years, Father Corby ministered to the needs of Catholic soldiers in the Army of the Potomac. The editor of Corby’s memoirs says about him, “Chaplains, like officers, won the common soldiers’ respect with their bravery under fire. Father Corby’s willingness to share the hardships of the men with a light-hearted attitude and his calm heroism in bringing spiritual and physical comfort to men in the thick of the fighting won him the esteem and the friendship of the men he served.  Frequently under fire, Corby moved among casualties on the field, giving assistance to the wounded and absolution to the dying” (Memoirs of Chaplain Life by Very Rev. Corby, Notre Dame, Indiana, “Scholastic” Press, 1894).  Before the Brigade engaged the Confederate soldiers at a wheat field just south of Gettysburg, Corby, in ”a singular event that lives in the history of the Civil War”, addressed the troops. “Placing his purple stole around his neck, Corby climbed atop a large boulder and offered absolution to the entire unit, a ceremony never before performed in America.  Corby sternly reminded the soldiers of their duties, warning that the Church would deny Christian burial to any who wavered and did not uphold the flag” (Memoirs of Chaplain Life ).   Following his service in the Civil War, he returned to Notre Dame and served as its vice-president in 1865 and president from 1866-72.  During his first administration, enrollment at Notre Dame increased to more than 500 students. In 1869 he opened the law school and in 1871, he began construction of Sacred Heart Church.  Notre Dame was still small so Corby taught classes and knew most of the students and faculty members.  At the end of his term at Notre Dame in 1872, he was sent to Sacred Heart College in Watertown, Wisconsin, a young institution which Corby placed on firm financial footing.  He became president of Notre Dame a second time from 1877-81. When he returned to Notre Dame, it had not yet become a significant academic institution. This second presidency saw the 1879 fire that destroyed the old Main Building of the school. Corby sent all students home and promised that they would return to a “bigger and better Notre Dame.”  He overcame the $200,000 fire loss and rebuilt the Main Building with its Golden Dome.  In addition to his presidency, he served as the Holy Cross Provincial when Father Sorin became Superior General.  Father Corby died of pneumonia on December 28, 1897. His casket was borne to the grave, not by his fellow Holy Cross priests as was the custom, but by aging Civil War veterans. His coffin was draped in the flag of his old regiment and a rifle volley was fired as his coffin was lowered into the grave. (Murray, Samuel. Father William Corby (1903-10). Gettysburg, Pennsylvania.)

Published by Brother Phil and Ben

Phillip Smith and Benjamin Rossi established The Voice of Moreau blog on September 15, 2018. View all posts by Brother Phil and Ben